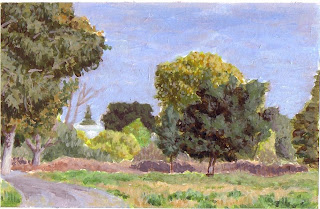 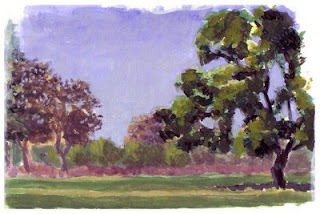 Exercising the observation skills. Went out and did some painting from life at Guadalupe Gardens in San Jo. Love it 'cause I always finish it up with a meal at Panera... I hate the sky in these, they reproduced poorly, but in the original - its not much better. I keep loosing my whites. I know, I know... I gotta preserve my whites when working with the medium (i used acrylic). Anyhow, good to know for next time. Going into winter, so I there'll be an abundance of light values. Gotta remember that when I go out: restraint!
Posted by Nelson Hernandez at 8:51 PM 1 comment: 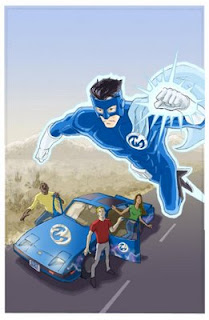 Following Vinnie's cover notes, this is the cover I have come up with as another prop for the Surge of Power sequel. Basically had to crank this one out this weekend cause the prop goes into the production next week! Vinnie had quite a few specifics for this cover, hope I delivered. I will have problems with it I'm sure. Wonder why Surge is in such a hurry and where's he's coming from? heh heh...
Another SURGE II Cover 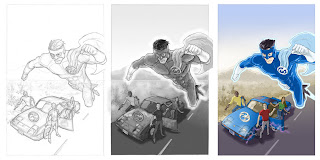 After a little back & forth, we've come to this cover layout. Still awaiting full approval before I can move on to color. Here's a cleaned up line & quick tonal pass for values. A fresh look tomorrow will help me tweak the values better. 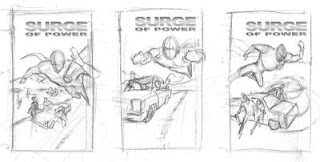 Another prop cover needed for Surge of Power II. Just sent off these thumbs to my producer Vinnie Roth, for approval. Awaiting his follow up comments. Image based on his description. The figure in the 3rd image (far right) is kinda cool, but I'd definetely change "Surge's" position. But the "Surge Mobile" is meant to be a center of focus, so don't know if Vinnie will want the front of the car obscured. I'll have to wait and see... Any other comments/suggestions appreciated. Could use the feedback.
Posted by Nelson Hernandez at 8:37 PM 2 comments: